For the past decade, events in Orlando have looked to Stages Plus for full service stage rentals where the performance can shine. What began with supplying a platform stage to a local DJ grew into providing safe and durable services for stages, drapes, photobooths, balloons, and more across Florida.

To meet the recreational event industry’s demands their fleet consisted of easily navigable vehicles with high capacity. And the events they supported typically happened on the weekends, so their vehicles were often sitting during the weekdays. In late 2019 David Meister, President of Stages Plus, found an opportunity to get the company’s idle vehicles rented with the commercial truck-sharing platform COOP. He liked the idea that he could get his vehicles rented and always had the final-say when his vehicles could be reserved.

He quickly discovered local courier businesses regularly needed straight trucks and cargo vans, like the ones Stages Plus had in the company’s fleet that were underutilized during the week. His two 26’ box trucks and cargo van were a great option for local Orlando businesses who looked for a commercial rental vehicle, and covered David’s transportation costs when the vehicles wouldn’t normally be on the road. 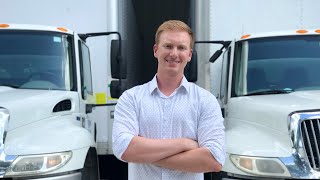 No one expected the state of the 2020 event industry when David first joined COOP in late 2019. Normally, private and corporate clients would be lined up for their expertise but this year’s pandemic put a halt to many events. Globally, the event industry felt the effects of regulations placed on social distancing and subsequently large event crowds. Stages Plus sought new ways of saving money and generating revenue by necessity.

With more and more weekend bookings canceled and the trucks and vans no longer utilized Friday through Saturday, David reached out to COOP. Since Stages Plus had success during the weekdays, he thought the platform could help to offset the business’s costs all week long. David simply added more available days to those vehicles and readied to hand off the keys. And it paid off!

“It’s been able to offset some of our truck costs, some of our insurance costs, and some of our just ongoing operational costs while we aren’t doing the normal amount of business that we would be during this time,” he said.

A Solution that Brought Repeat Business

After they joined and even through the pandemic, David’s Renters returned to rent his vehicles again and again. By the nature of their work, all their vehicles came with lift gates which were a huge selling point. Stages Plus’ trucks allowed their Renters to lift heavy loads on and off, so they often came back to them. Many of these Renters were courier services right in the neighborhood of his business. If you’re in the Orlando area, you should check out what Stages Plus has available to rent today.

David found it easy to have himself or one of his managers available on site to complete the pick-up and drop-off process. It didn’t take much time, so it didn’t take much focus away from his business. He praised the ability to get his fleet rented out with COOP ‘on the side’ while he took the steps needed to adapt to the times.

Ease of Working with Our Team

When David spoke about his experience on the platform, he emphasized just how far our team members in Orlando went for his business. “It’s almost like I’m their only customer,” he said of the phone being picked up with attentiveness and expertise each time he dialed. Whenever he needed to learn the latest rental trends, optimize his listing, or discuss what’s best for his business he had a representative at COOP to talk to.

“[Our COOP representative] has gone above and beyond multiple times for us, [and] has reached out to us to make reservations work. That support has been fantastic,” David said.

Expand the Business with the Platform

Now that Stages Plus had a chance to operate alongside COOP during the good times and the bad, David was confident that the company will continue to move forward with the platform. He planned to keep his vehicles listed and always have his manager or himself available for COOP in the foreseeable future. And he suggested the same for other businesses with idle vehicles, “Any business with a vehicle suitable for the COOP platform that would like to see it move during its off-time should be on it.”