Donald Bowman founded the company in 1972, with its first branch in Williamsport, Maryland. Since then, Bowman Trailer Leasing has grown into a regional provider of road trailers, storage trailers, and sea containers. Now they occupy over thirty locations and have over 53k trailer vehicles nationwide .

Leonardo D’Agostini, Business Development for Bowman Trailer Leasing, faced a yard filled with dozens of 48’ and 53’ over the road trailers waiting to go out on rental. The standing fleet was ready but underutilized. He found himself balancing books while these vehicles in limbo served as a constant reminder of potential earnings.

In COOP, he discovered “a daily rental program, which we do not have.” He took confidence in the assurance that his vehicles were in good hands, and the ease of sharing on the platform. The novel peer-to-peer truck sharing marketplace proved flexible to his fleet. Within a week, he started generating revenue on once idle equipment.

Bowman Trailer Leasing have since leveraged COOP to connect to a network of trusted businesses in South Florida, Atlanta, and now have expanded their transportation listings to the Orlando frontier. 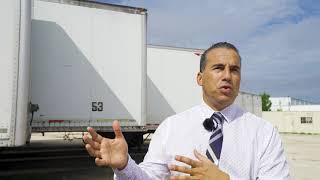 Bowman Trailer Leasing, a leading trailer rental company along the U.S. east coast, found a reliable marketplace in COOP to share their idle inventory with local businesses. Donald Bowman founded the company in 1972, with its first branch in Williamsport, Maryland. Since then, Bowman Trailer Leasing

Leonardo has been happy with the responsive team he’s connected with since joining COOP.

Summer months are typically slow, but this year they’re generating “incremental rental revenue” from COOP’s unique platform that cuts the downtime on their trailer vehicles. Since getting started in May 2019, Bowman Trailer Leasing has had dozens of long-term transactions.

Engaged with the expansion of COOP, they’ve followed the sharing platform to new markets.

“The COOP platform really shows how the transportation industry is evolving,” said Leonardo.

Learn more about how customer Bowman Trailer Leasing has expanded its operations alongside COOP today.